I made some promises here yesterday that I have to break today (Rabelais would approve) because of last ditch paper grading.

However, the following passage is a prelude to our discussion of Jenkins, Pickstock, and paganism.  It also confirms our suspicions about the separation of the sacred from the profane here.  Denis Feeney is a Classics scholar, so it warms my cockles to be vindicated by someone who does not ostensibly have a pony in the present debates about secularism, or what’s come to be known as the post-secular. 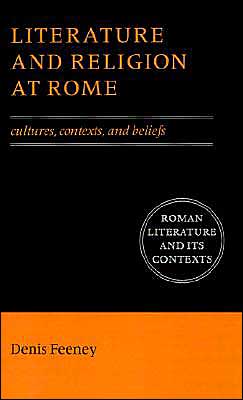 Making a mess of it.

He starts Literature and Religion at Rome: Cultures, Contexts and Beliefs, which a friend in Classics tells me is something of a classic in the field, with the following:

“Someone writing a book on Roman literature and Roman religion would do well to begin by acknowledging that the Romans had no word corresponding to ‘religion’ and no word corresponding to ‘literature.’ Rather than being dismayed by this fact, however, we might use it to help refocus the familiar observation that in no society is there an isolated sphere, called ‘Religion,’ set over against another, called ‘Literature.’  ‘Literature’ is not a category in nature, and nor is ‘Religion’ a given, which literature addresses or reflects. Rather, when we tackle the interaction between what we call ‘religion in real life’ and what we call ‘religion in literature,’ we encounter the same difficulties of referentiality and representation that have become familiar topics amongst Latinists in recent discussions of love or politics or friendship in ‘real life’ and in ‘literature.'”

By the way, if you look here, the Titian painting featured above might not deal directly with sacred and profane love, but it might deal with it indirectly. Enjoy the confusion and the subordinate clauses.  It is catholic in all cases.