It’s a given von Balthasar is smarter than you are.  Henri de Lubac once called him the most cultured man alive.  The story is he was so cultured he gave away his stereo because he could play back all of Mozart . . . in his head.  True story.  He’s frequently given flack for concentrating too much on beauty and not enough on politics, especially when he makes statements like this one which I cited in an earlier post here:

“Beauty is the disinterested one, without which the ancient world refused to understand itself, a word which both imperceptibly and yet unmistakably has bid farewell to our new world, a world of interests, leaving it to its own avarice and sadness. No longer loved or fostered by religion, beauty is lifted from its face as a mask, and its absence exposes features on that face which threaten to become incomprehensible to man… Our situation today shows that beauty demands for itself at least as much courage as do truth and goodness, and she will not allow herself to be separated and banned from her two sisters without taking them along with herself in an act of mysterious vengeance.”

This vengeance takes on a decidedly political coloring when you consider its effects:

“But whenever the relationship between nature and grace is severed (as happens… where ‘faith’ and ‘knowledge’ are constructed as opposites), then the whole of worldly being falls under the dominion of ‘knowledge’, and the springs and forces of love immanent in the world are overpowered and finally suffocated by science, technology and cybernetics. The result is a world without women, without children, without reverence for love in poverty and humiliation – a world in which power and the profit-margin are the sole criteria, where the disinterested, the useless, the purposeless is despised, persecuted and in the end exterminated – a world in which art itself is forced to wear the mask and features of technique.” 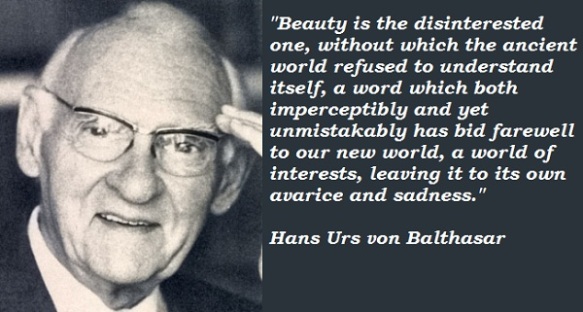 So much for von Balthasar as a aesthete.  What’s more, his answers to modernity’s cult of force are even more radical than you’d ever suspect.  They strike at the roots of our most cherished beliefs about what’s feasible:

“A few centuries ago, humanity was ripe for the insight that slavery is incompatible with human rights. Today we see the dawning of the day when responsible humanity will be ripe for the insight that bloody war contradicts its present adult state and is no longer an appropriate means to resolve questions and conflicts of humanity that has become indivisible and takes charge of its own self; this is the day when the best men begin to be ashamed of war. Very earthly economic and political reasons may have contributed to the emergence of this insight, but it is nevertheless the Christian seed that sprouts in the human conscience and leads to this decision, which is mature today.” [Thanks for the lead Gregory Dean Voiles.]

Sounds strange, doesn’t it?  But you must admit the notion of abolishing the institution of slavery, which has been with humanity since time out of mind, must have seemed as silly to 19th century moderns as the notion of abolishing war does to us. Don’t forget that it wasn’t secularists, but Christians with their nutty Bible-reasoning who led the abolitionist movement.  Stephen L. Carter in God’s Name in Vain, a book I’ve cited here and here, reminds us of this important historical detail; the separation of church and state was used against abolitionists.

So, dare we hope all men be saved from war?

By the way, Happy Birthday once again Toby! Dude, start a blog.