My friend Anders liked these essays so much he now has a tattoo with the title on his arm. Be careful about what books you give to others.

As Adam Zagajewski advised in a poem I posted here.

. . . Only in the beauty created
by others is there consolation,
in the music of others and in others’ poems.
Only others save us .  .  .

The first bit of savings I would like to pass on comes from Sophie  Lippiatt’s blog “Something for a Rainy Day.”  It’s an entry entitled “Beauty.”  Here’s a sample:

“The instinct to pursue and perceive beauty in ourselves and other people (as well as in the world around us) is as natural, ancient, and positive an instinct as the earth itself. It helps us to empathise and connect with the outside world, and to promote justice and truth in freedom and love. Beauty, when understood in the limited and damaging sense that our culture currently understands it, is a dangerous and terrible thing that traps men and women into cycles of despair, eating disorders, and self abuse. It is a very good and noble thing to reject this and to try to change it, but I, for one, am not willing to throw the baby out with the bathwater in the fight against misconceptions and misrepresentations of beauty in the media by turning against beauty altogether. I believe that beauty is worth the fight. After all, beauty, when understood in its right and fullest sense, just might help to save the world.”

One of my many pictures of Warsaw brutal.

Sophie’s thoughts about brutalizing architecture earlier in the post really struck a chord with me.  I did not grow up in the beautiful environs of Oxford.  I grew up around the brutalized architecture of postwar Warsaw, which could easily out-brutalize the most brutalized neighborhoods of Manchester.  To me Warsaw is the architectural equivalent of a botched abortion.  I like to think of myself as not-so-secretly Krakovian. 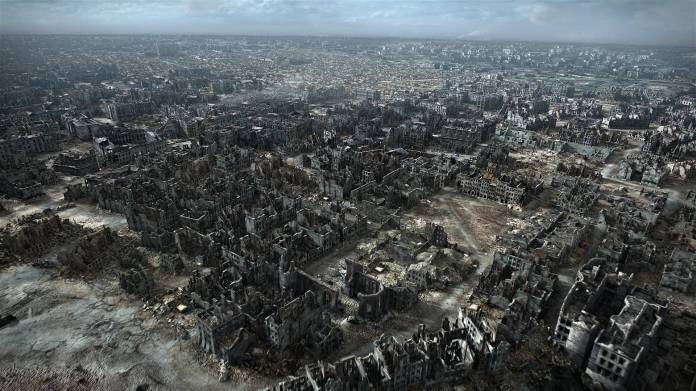 Warsaw after WWII: not much promise there.

On the other hand, Scott Dodge at Καθολικός διάκονος emphasizes the dangerous side of beauty:

“One of the things Pasolini that is palpable in Mama Roma is the desolation that results from the lack of beauty, the deleterious effect it has on us, assaulting our humanity. This brings me back to beauty and our need for it. The late John O’Donohue, in his book, Beauty: The Invisible Embrace, observed, ‘We feel most alive in the presence of the Beautiful for it meets the need of our soul.’ He goes on to note that, culturally, we live an age of the ugly. This last observation caused him to turn to Hans Urs Von Balthasar, specifically to Von Balthasar’s theological aesthetic [the following passage is from the first volume of The Glory of the Lord]:

Beauty is the disinterested one, without which the ancient world refused to understand itself, a word which both imperceptibly and yet unmistakably has bid farewell to our new world, a world of interests, leaving it to its own avarice and sadness. No longer loved or fostered by religion, beauty is lifted from its face as a mask, and its absence exposes features on that face which threaten to become incomprehensible to man… Our situation today shows that beauty demands for itself at least as much courage as do truth and goodness, and she will not allow herself to be separated and banned from her two sisters without taking them along with herself in an act of mysterious vengeance.”

Ekberg in La Dolce Vita is not gratuitous at all if you follow the links.

Finally, a reminder from Adam Zagajewski:

Clear moments are so short.
There is so much more darkness. More
ocean than terra firma. More
shadow than form.